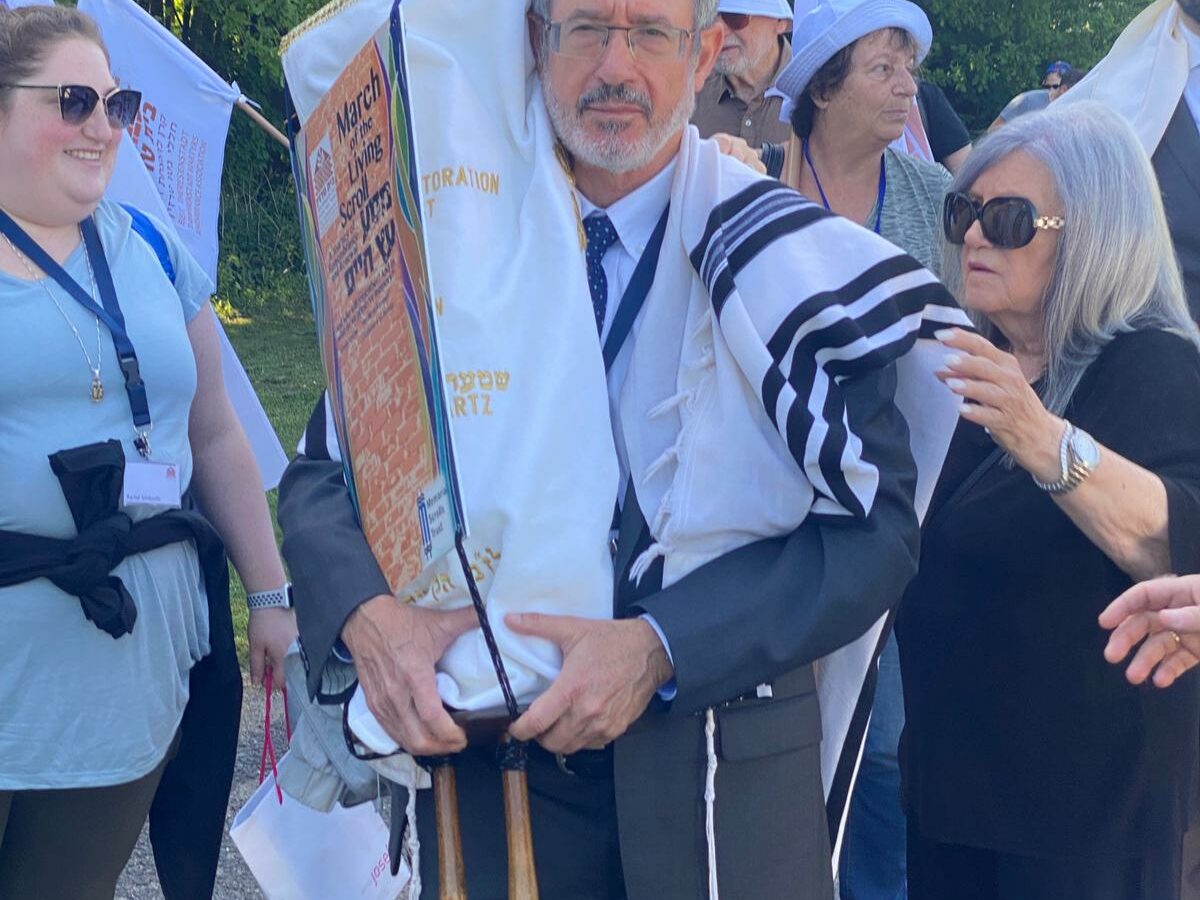 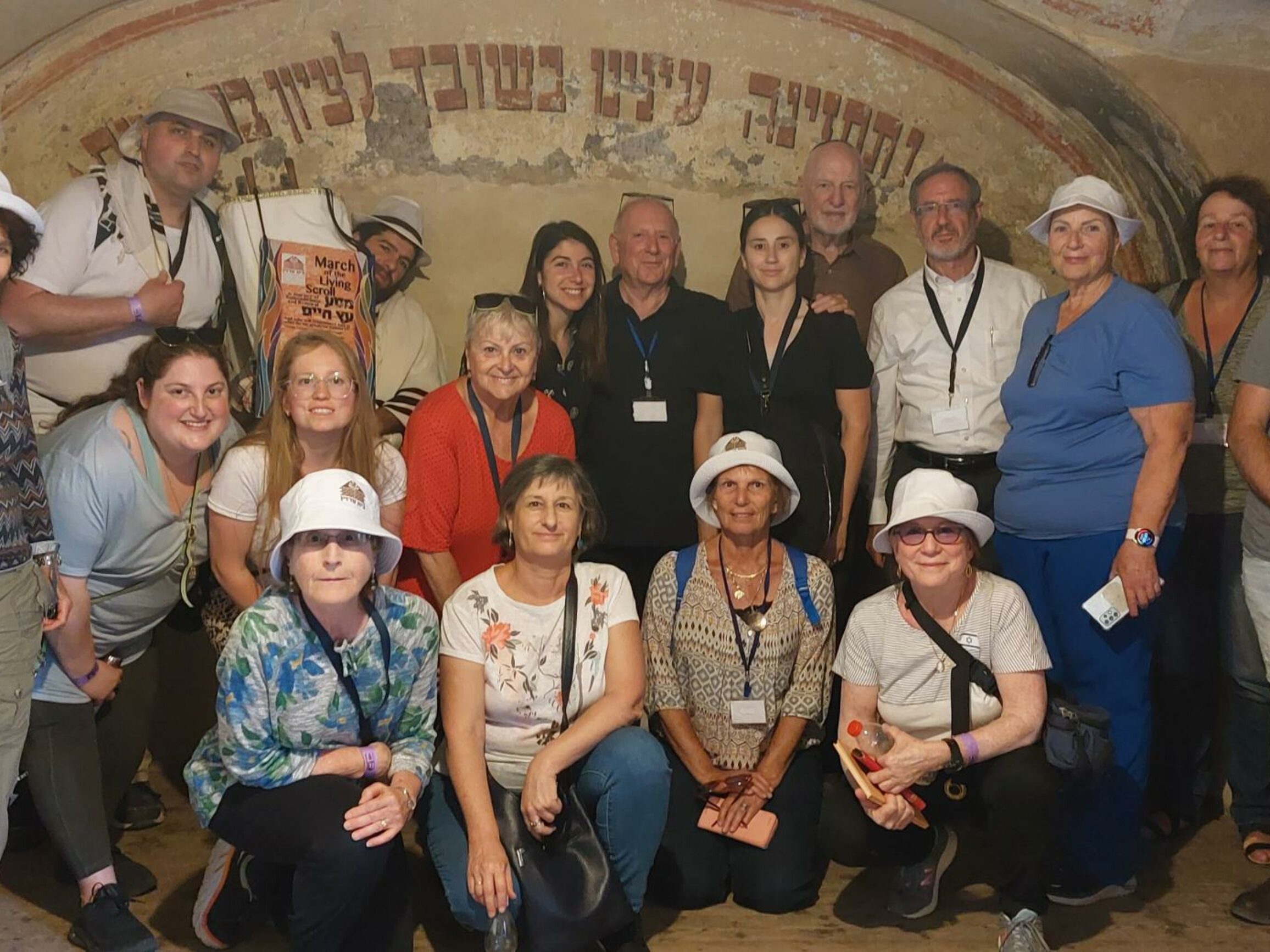 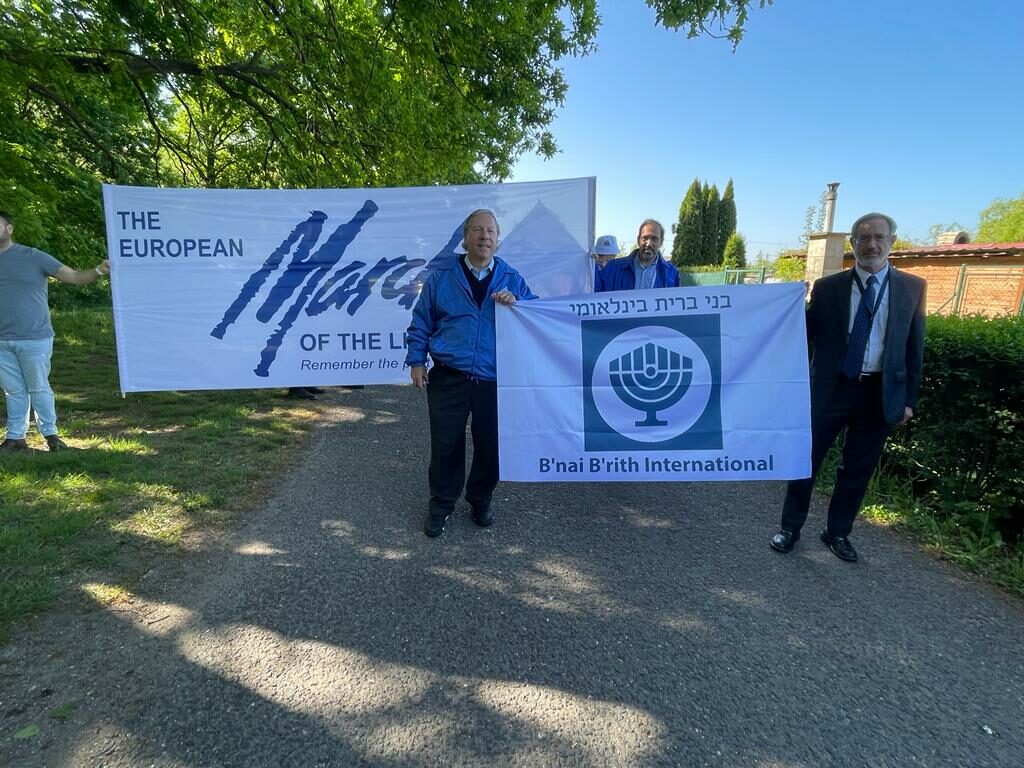 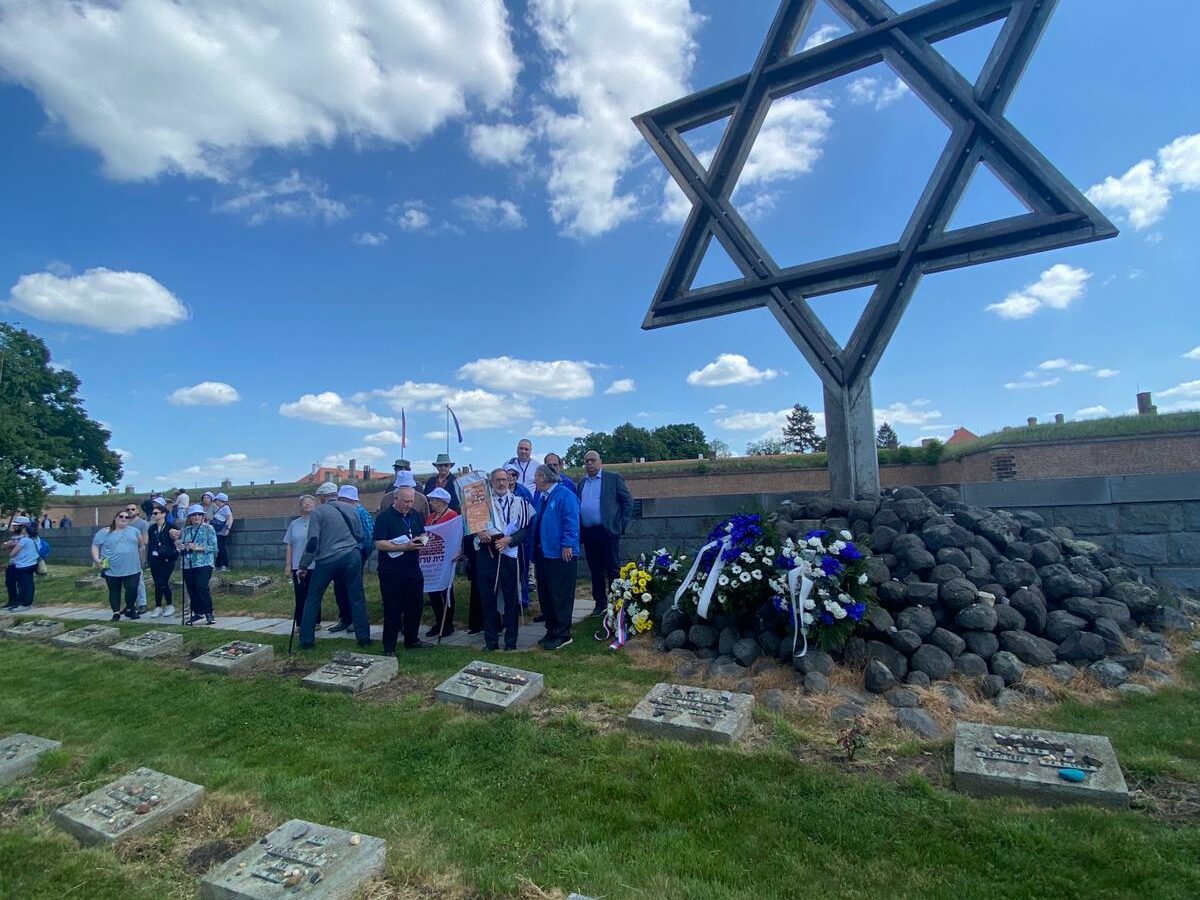 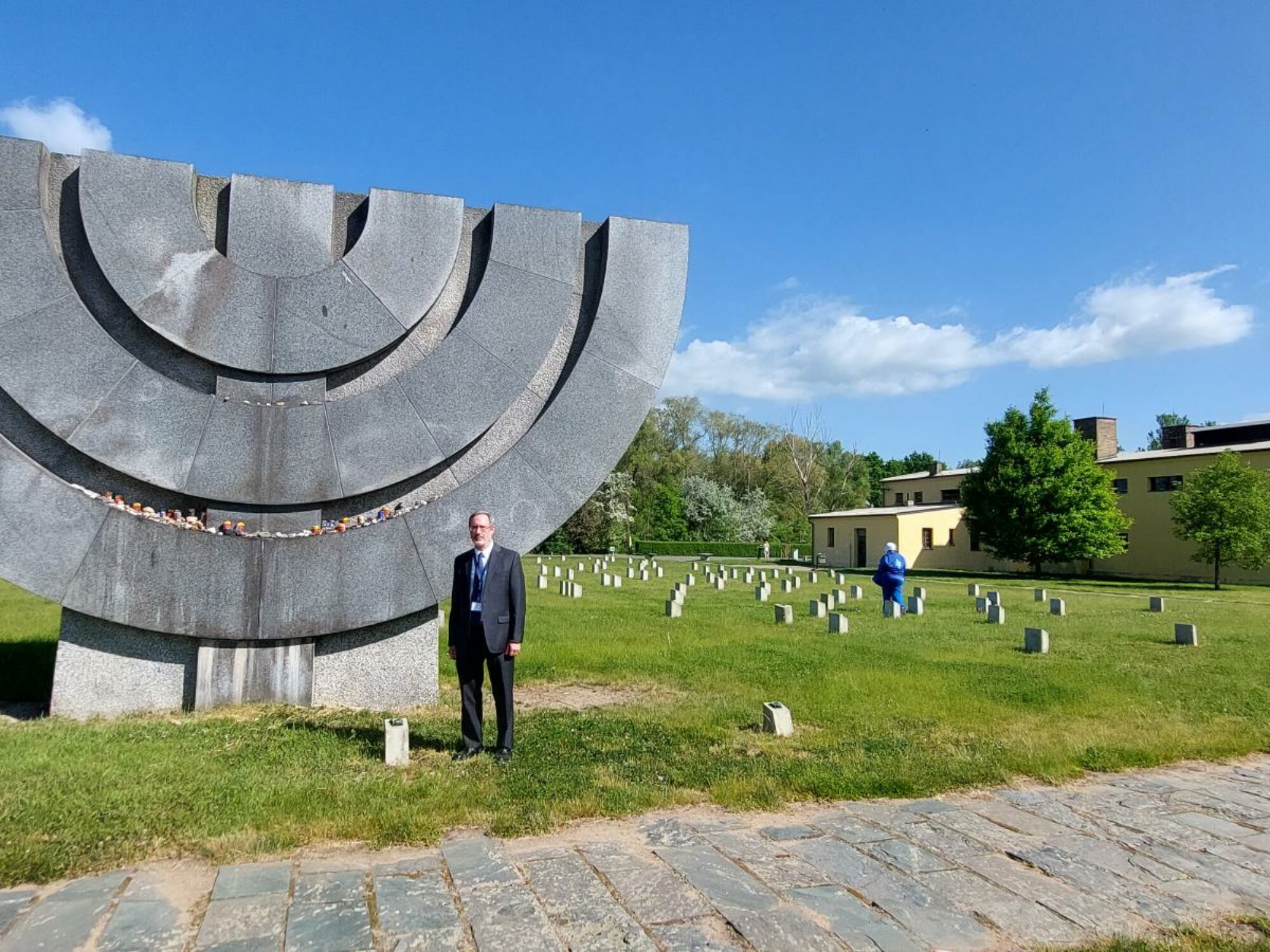 (Washington, D.C., May 17, 2022)–B’nai B’rith International co-hosted a program commemorating the Czech Jewish community and Czech Holocaust victims at the Theresienstadt concentration camp on May 15 marking 77 years since the ghetto’s liberation.

Named “March of the Living Scroll: A Journey of Remembrance and Renewal,” the program included the rededication of a Torah scroll once used by the Olomouc Jewish community—one of 1,564 Czech and other Torah scrolls rescued by a Jewish philanthropist in 1964 after surviving the horrors and oppression of Nazism and Communism under appalling conditions in an abandoned synagogue and placed under the auspices of the Memorial Scrolls Trust (MST) in London. These scrolls have become symbols of Jewish continuity and have been loaned to Jewish communities, synagogues and institutions around the world.

The Olomouc scroll will go on loan to Beit Theresienstadt, Kibbutz Givat Haim Ihud, Israel, where it will become an inspirational source of a unique Bar/Bat Mitzvah Jewish Heritage educational program. By exploring the historical and cultural background of the Olomouc scroll, youth who participate in the Beit Theresienstadt program will gain a better appreciation and understanding of their Jewish heritage.

B’nai B’rith had a significant presence in pre-war Czechoslovakia, with 16 lodges and 2,000 members across the country, including in Olomouc. Its activity ceased with the German invasion on March 15, 1939. The Renaissance Lodge in Prague was established in 1991 as the legal successor of the organization’s pre-war activity.

The March of the Living Scroll began at the Bohusovice Train Station near Terezin—the same train station where tens of thousands of Jews arrived from November 1941, when the camp was established, until May 1945, when the SS fled advancing Red Army troops. The march commenced with the sounding of the Shofar by Rabbi David Maxa and proceed in silence to the crematoria. B’nai B’rith World Center-Jerusalem Director Alan Schneider read a letter from B’nai B’rith CEO Daniel S. Mariaschin in which he warned that “In the 21st century we are still witness to the effects of this greatest tragedy to befall our people. Holocaust revisionism and denial, aided by the internet via social media, is rising daily just as the number of survivors and eyewitness to the horror and barbarity meted out by the Nazis and their collaborators, is dropping precipitously. We must put in place as many programs of Holocaust education and remembrance as possible, lest the passage of decades and the re-writing of history erase the memory of the victims and the terrible crimes committed on this soil and throughout Europe.”

Schneider also paid tribute to Aaron Menczer, a member of Aliyat HaNoar in Vienna before the war, who organized the escape of hundreds of Jewish children—most of them stateless and therefore especially vulnerable—to Yugoslavia together with the head of Aliyat HaNoar Recha Frier. In February 1939 Menczer
accompanied a group of youngsters to Eretz Israel, but despite the pleading of friends, he returned to Vienna to continue his rescue activities. On Sept. 24, 1942, Menczer was transferred with his group to Theresienstadt where he continued his educational activities. In August 1943 he was given responsibility for a group of 1,269 orphaned children who were transferred to the ghetto from Bialystok. Six weeks later he asked to join them when they were deported to Auschwitz where they were all gassed.

Aaron Menczer and Recha Frier were presented posthumously with the Jewish Rescuers Citation—a joint program of the B’nai B’rith World Center and the Committee to Recognize the Heroism of Jewish Rescuers During the Holocaust.

Participating in the program were two survivors of Theresienstadt—who shared their memories: Dita Kraus, who was deported from the Ghetto to the Children’s Block in the “Family Camp” at Auschwitz as a young woman and Hannah Sternlicht, who lost her parents in Auschwitz and survived on her own at the harsh labor camps of Freiberg and Mauthausen. Dita Kraus and Hannah Sternlicht recently published books in which they describe their experiences at the camp.

Hannah Sternlicht: “I often ask myself how I managed to survive. I am sure it has a great deal to do with my upbringing, although all that ended when I was 12. At first, I did not share what I had gone through, but when I saw my daughter take an interest and look for literature about the Holocaust, I realized that I must tell my story and pass it on. Despite the difficulty of revealing it all, I consider it a calling and obligation. I promised myself that, so long as I can, I will continue to do so.”

Dita Kraus: “I never look back to the past. I always look forward, think of what will happen tonight, tomorrow, next month. I look to tomorrow, to the future. If I do look back into the past I prefer to remember the days before the war.”

After completing the march to the Small Fortress, the mission participated in the official Czech Republic national commemoration marking 77 years since the liberation of Theresienstadt, during which B’nai B’rith’s participation was noted. The event was attended by the Speaker of the Czech Chamber of Deputies, Prime Minister, members of government, supreme court judges, members of the diplomatic corps and other officials.

Also participating were the president of the Jewish Federations in Bohemia and Moravia, Petr Papousek; Tomas Kraus, director of the Federation of Jewish Communities in the Czech Republic and president of B’nai B’rith Prague Lodge; Tami Kinberg, Beit Theresienstadt director; Phyllis Heideman, president of the International March of the Living and B’nai B’rith Honorary President Richard D. Heideman.

Tami Kinberg, Beit Theresienstadt Director: “Taking the Torah Scroll from Britain back to the Czech Republic and from there to Israel embodies a significant educational journey that links us to the wonderful history of European Jewry. The salvaged Torah Scrolls are not just a symbol of victory for the Jewish spirit but also of Jewish revival. We are excited to receive the Torah Scroll in Beit Theresienstadt and to harness it to link Bar/Bat Mitzvah children to the generations of their nation.”

Phyllis Heideman, International March of the Living President: “The March of the Living marches wherever Jews lived, survived, and were murdered during the Holocaust, to ensure that the memory is not forgotten. Now, perhaps more than ever before in our lifetime, we must do all within our power to keep Holocaust memory alive. The rescue, preservation, and restoration of over 1500 Torah Scrolls from Prague alone is true testament to the spirit of the Jewish People under all circumstances.”

Alan Schneider, Director of B’nai B’rith World Center-Jerusalem: “International B’nai B’rith is honored to participate in this sacred initiative of redeeming a Torah Scroll from the depths of the ruined Jewish communities of Czechoslovakia. This is one of many efforts that the organization initiated or took part in since the Holocaust ended. B’nai B’rith was active in Europe through hundreds of bureaus, beginning in Germany in 1882 and until the wonderful community was destroyed in the Holocaust and which is only partially restored today. Many members of the organization perished in the Holocaust. Until the Nazi forces repealed B’nai B’rith’s status as an independent organization and seized its assets in 1938, it operated 16 bureaus, including one in Olomouc, the origin of the Torah Scroll to be brought to Beit Theresienstadt. We are therefore especially excited to participate in this event that reflects victory over the Nazis who intended to destroy, not only the people of Israel, but also to obscure its Torah, beliefs and culture.”

The final event of this Journey of Remembrance and Renewal will take place on Friday, May 20, when the MST Olomouc Torah scroll will be installed at its new home in a festive ceremony at the Museum Beit Theresienstadt.

B’nai B’rith International has advocated for global Jewry and championed the cause of human rights since 1843. B’nai B’rith is recognized as a vital voice in promoting Jewish unity and continuity, a staunch defender of the State of Israel, a tireless advocate on behalf of senior citizens and a leader in disaster relief. With a presence around the world, we are the Global Voice of the Jewish Community. Visit www.bnaibrith.org.

77 years to Theresienstadt ghetto liberation: “The Journey of a Torah Scroll"