CEO and U.N. Affairs Dir. Op-ed in JPost: Discrimination, Demonization and Delegitimization Has No Place at the U.N.

Read the op-ed by B’nai B’rith CEO Daniel S. Mariaschin and Director of U.N. and Intercommunal Affairs David Michaels in the Jerusalem Post.

Navi Pillay, who heads the latest UN “commission of inquiry” on Israel, has been called out for prejudice – as have two others who were handpicked for the panel.

She’s not showing readiness to reflect constructively on the feedback. “In my own country, that will not be received well,” she warned the UN. At a press conference, she said “the abuse is so bad and so false.”

In a letter to the president of the Human Rights Council – who would later rebuke especially offensive remarks by a commission member – Pillay alleged that her colleagues were being “deliberately misquoted,” adding, “The commission takes great exception to personal attacks.”

In correspondence to the General Assembly president, she protested that Israel’s UN ambassador accused the commissioners of being “heartless” toward Israeli victims of terrorism.

Pillay then insisted that “safe space” be afforded the commission – which she said objects to “language and insults” questioning its “objectivity and impartiality.”

Apparently, Israel and its Jews are legitimate targets for criticism in the name of human rights, but not three political appointees whose profession of fairness is utterly belied by their performance.

Members of UN human rights require to be characterized

Members of UN human rights mechanisms are required to be characterized “in all cases” by “independence and impartiality.” This is especially critical in the case of a probe concerning Israel – which has been the subject of more UN condemnation than all other countries combined.

Yet each of the three members of the current UN commission on Israel was characterized by pre-existing, public and strident positions on the very country they were to examine. And since the commission’s creation, one of those members, Miloon Kothari, prompted outrage by suggesting that Jews control “social media” – and that Israel, uniquely, should be excluded from the UN. Another, Chris Sidoti, asserted that complaints of antisemitism are dispensed “like rice at a wedding.”

The commission’s first two reports make no more of an attempt to even feign balance. Both are shocking in their total disregard of reasoned critiques of the body’s bias, focusing practically exclusively on attacking Jewish Israelis.

The most recent report, issued in October, features some 154 references to Israeli Jewish “settlers” or “settlements” – but zero references to Hamas, Palestinian Islamic Jihad, Hezbollah or Iran.

The report’s concluding recommendations demand only that Israel, not the Palestinians or others, comply with international law – and asked UN bodies to hold only Israel to account, something the General Assembly is now poised to do by referring Israel to the International Court of Justice.

Both reports explicitly express concern only over harm done to Palestinian women and children, not Israeli women or children.

In its newer, 28-page report, the extent of the treatment of Palestinian wrongs done to Israelis is a single mention halfway through the document, saying: “1,024 Israelis were killed by Palestinian armed groups” over a several-year period.

Both reports’ footnotes associate the inflammatory label of “apartheid” exclusively with the Middle East’s sole pluralistic democracy, Israel, and cite only non-governmental organizations harshly critical of Israel, none that focus on Palestinian abuses. Kothari added that even the apartheid slur “is not sufficient” to “end the crisis of occupation for the Palestinian peoples.”

Both commission reports dedicate zero attention to xenophobia and bigotry against Jews or other minorities in Palestinian society.

It innocuously references Hamas only as “the de facto authorities in Gaza” – excoriating, simplistically, Israeli armed acquisition of land, but not Hamas’s.

It speaks of land as “integral to the Palestinian identity” – but not to Israelis’ identity.

It reserves suggestion even of possible “war crimes” and “crimes against humanity” only for Israel. It speaks of the “mental and physical health,” the “right to… life, liberty and security,” and the “anxiety, fear and humiliation” only of Palestinians, never Jews.

It only speaks of “impunity” over attacks – including supposedly systemic “racist and sexist language” – against Palestinians, never Jews.

It refers only to Israeli, never Palestinian, actions as “collective punishment.” It highlights a series of individual Palestinians expressing grievance against Israel – but never so humanizes any Israelis victimized by Palestinian violence and incitement.

It identifies only Israel as responsible for inhibiting a two-state solution – despite regional jihadists’ doctrinal commitment to Israel’s destruction. And the commission already declared in its very first report that “perpetual occupation” is “the one common issue” underlying the conflict.

Not to be outdone, the October follow-up report prognosticates that “Israel intends the occupation to be permanent.” It fails to mention that Israel had previously withdrawn every single Israeli settlement and soldier from the Gaza Strip, that Israel had offered Palestinians a state on nearly the entirety of the West Bank and Gaza, and that Arabs had forcibly removed prior Jewish inhabitants from eastern Jerusalem and the historic Judea and Samaria some 75 years ago.

One need not endorse every Israeli policy to recognize that this record by the commission does not amount to a serious examination of the Middle East’s realities – and that the three commission members have thoroughly failed to demonstrate equal concern for the basic human rights of Israeli Jews.

Such discrimination, demonization and delegitimization should have no place at the UN. Navi Pillay and her colleagues deserve not sympathy but dismissal.

Daniel S. Mariaschin is the CEO, and David J. Michaels is director of UN and Intercommunal Affairs, at B’nai B’rith International. 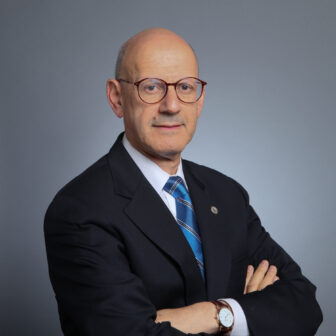 Daniel S. Mariaschin is CEO of B’nai B’rith International. He directs and supervises its programs, activities and staff around the world. He also serves as director of B’nai B’rith’s International Center for Human Rights and Public Policy, coordinating its programs and policies on issues of concern to the Jewish community. He has been involved in seeking restitution for Holocaust survivors and their families for almost three decades. Mr. Mariaschin meets with world leaders, seeking to advance human rights, protect the rights of Jewish communities worldwide and promote better relations with the state of Israel.

David J. Michaels is Director of United Nations and Intercommunal Affairs at B’nai B’rith International. He previously trained at the Foreign Ministry of Germany, the Conference of Presidents of Major American Jewish Organizations, the Embassy of Israel in Washington, Ha’aretz and the International Fellowship of Christians and Jews. A Wexner Fellow/Davidson Scholar, and winner of the Young Professional Award of the Jewish Communal Service Association of North America, he holds degrees from Yale and Yeshiva University.

Will a Right-Wing Government in Israel Further Alienate U.S. Jewry?

Putting it in Writing